In austere surroundings, leading politicians, conservationists, governments representatives, diplomats and non-government organisations joined Prince Charles and Prince William to discuss the plight of some of the world’s endangered species; noticeably elephants, rhinos and tigers. With broadcaster Kate Silverton acting as the moderator, the 150 invited guests were immediately reminded of the extent of the issue we are facing. Annually in excess of 30,000 elephants are being killed for their tusks, in 2012 668 rhino were poached in South Africa alone for their horns, while only 3,200 tigers remain in the wild. 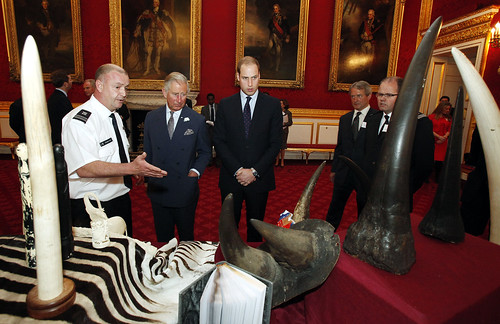 Copyright Clarence House
The ultimate purpose of the meeting was not to recognise there is a problem – those in attendance all realise there is – but to identify existing approaches being taken to tackle the problem and find ways to work collaboratively and ensure effective measures are adopted and pushed to the highest levels of government – making wildlife trafficking a priority issue for our leaders. The event was co-hosted by the UK Government’s Department of Environment, Food and Rural Affairs (Defra) and it brought together senior figures from organisations across the globe, focused on the protection of wildlife, including; WWF, Wild Aid, Elephant Family, Environmental Investigation Agency, Tusk Trust, Born Free, The Thin Green Line Foundation, Tsavo Trust, Northern Rangelands Trust, Environmental Justice Foundation, Earthwatch Institute, Wildlife Conservation Society, IFAW, Human Society International, CITES, UNEP, Interpol, IUCN, TRAFFIC, UNODC and the David Sheldrick Wildlife Trust. Key speakers introduced the challenges being faced and approaches being adopted; 1) Illegal wildlife trade as both a wildlife protection and global security issue 2) Demand reduction programmes 3) The need for enhanced law enforcement and criminal justice 4) Community based conservation, development and alternative livelihoods 5) The need for cross-cutting approach to the illegal wildlife trade The extent of the problem was highlighted repeatedly throughout the meeting; illegal wildlife crime is valued at between $7 billion and $17 billion a year! Organised criminal networks, involved in drugs, arms, people trafficking and money laundering are involved and there is increasing evidence that links funds from the illegal wildlife trade with terrorism. Importantly, it was made clear that the problem is not solely a wildlife one, as more than 1,000 lives have been lost, those of the rangers that have been killed in the line of duty. The crises being faced is not only about animals and habitats, the loss of which will have significant impacts on bio-diversity. It is about the communities and livelihoods of people, those reliant on wildlife and the income wildlife generates for nations through tourism. We have faced serious issues in the past, with both elephants and rhinos being slaughtered in their tens of thousands in the 70s, 80s and 90s. Nations stepped up, campaigns to educate and inform the then consumers of wild animal parts were deployed and in the case of ivory, a global ban on trade was implemented. Populations of species began to recover. Today’s challenge is driven by new emerging economies, where people wish to demonstrate their wealth and believe ivory presents an image of power, status and wealth. The challenge is made all the greater as technology has evolved since the last poaching crises, poachers come armed with automatic weapons, night vision equipment and even helicopters. All too often they are better armed and equipped than those on the ground charged with protecting wildlife and frequently laws pertaining to animal poaching do not fit the crime. A poacher arrested one day can be found poaching again just a week later, subjected only to just a petty fine for their original crime. Poaching and the associated trade in wild animals parts must carry with it sentencing fitting with a crime that today runs parallel to drug, human and arms trafficking. The meeting on 21st May did not reveal immediate solutions, there is no magic wand we can wave – the meeting should be seen as a line being drawn in the sand. With the support of the press and media, which has a significant role to play here, a point emphasised by Prince Charles in his speech, it is the responsibility of those in attendance to work collaboratively in driving forward solutions. From front line field protection efforts, through to demand reduction strategies in consumer nations, with law enforcement, the judiciary and governments all needing to make illegal wildlife trafficking a priority. So what next! Recognition by each and every one of us that if we do not act with immediacy we will in the next 10 to 20 years witness the extinction of elephants, rhinos and tigers in the wild. The impact would be immeasurable on all of us, even those that live geographically far from these species, as after the elephants, we will witness the loss of the forests – the lungs of the earth. Humankind is tragically increasingly detached from nature and all the worse for it – if we fail to recognise that we are part of the same web of life as all other species, then we will ultimately destroy the planet and ourselves with it. There were many powerful messages throughout the talks, however these words of the Prince of Wales must surely resonate with us all ‘The loss of wildlife would be an immeasurable stain on humankind’ and "Humanity is less than humanity without the rest of creation. Their destruction will diminish us all." We all have a role to play and each and every one of us make a difference. Join us and let us win this battle for the world’s elephants and rhinos. Keep up to date on the latest news about the ivory trade and our campaigning efforts through iWorry.